Triratna InHouse is proud to showcase a generous selection of Dharma texts translated into multiple languages by Sangharakshita and other members of the Triratna Buddhist Order.

Click each language to go to its translations page on thebuddhistcentre.com.

Triratna Translations includes a project to translate the main rituals and ceremonies used in the Triratna Buddhist Community into as many of the world’s languages as possible. That’s ambitious, but we’re a worldwide community and between us we’re in touch with all the people we need to make it happen!

Buddhist ceremonies in many languages

Translations into 28 languages of the most common Buddhist ceremonies used in the Triratna Buddhist Community. Included are the Dedication Ceremony, Threefold Puja, Refuges and Precepts, and more, in languages such as afrikaans, welsh, danish, german dutch, estonian, spanish, french, hungarian, norwegian, swedish, finnish, turkish, chinese, hindi, hebrew, indonesian, marathi, malayalam, pali, russian, telugu, thai, esperanto, latin and serbian. All  have been prepared and approved by practicing Buddhists from within the Triratna Buddhist Community and Order.

Available in hardback and kindle. 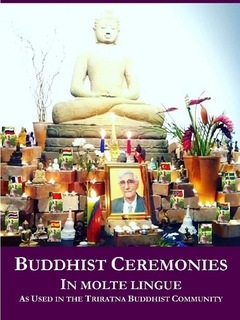 Triratna InHouse Publications aims to showcase the amazing range of talent within our community and Order, at least as expressed in literary form.  We'll be offering Dharma, personal stories, literature and poetry, and translations...